The theme is “Media Art x Cultural Resources Distributed Museum,” and different themes and contents are developed for each airport.

This time, we will report on the “Japan Media Arts Distributed Museum ETERNAL” exhibition that was held at Haneda Airport from February 1 to 7 in 2020! 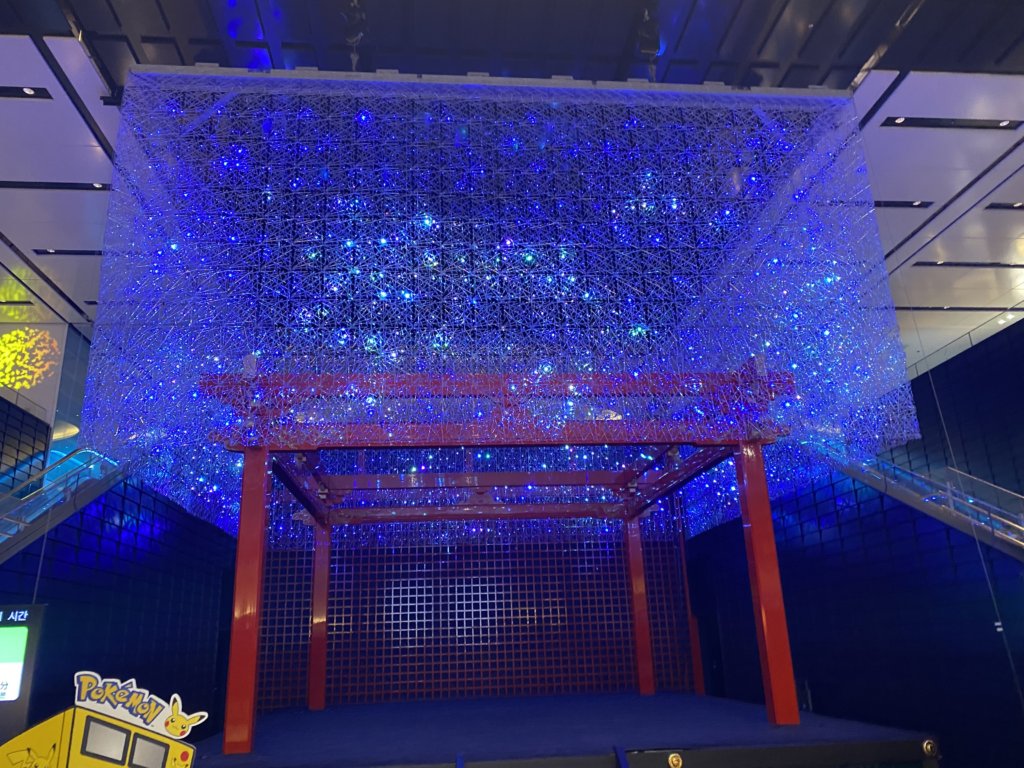 At the venue, Haneda Airport, there were torii objects for the event.
The futuristic illumination on the object was wonderful! 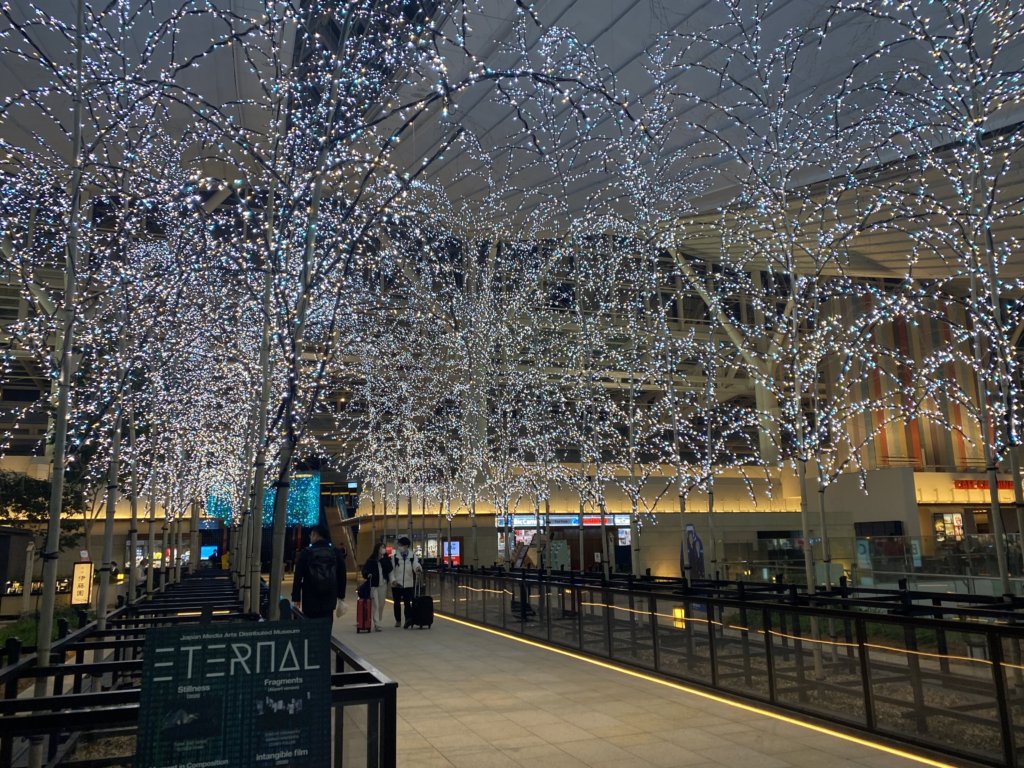 The passages were designed like cherry blossoms by illuminations. 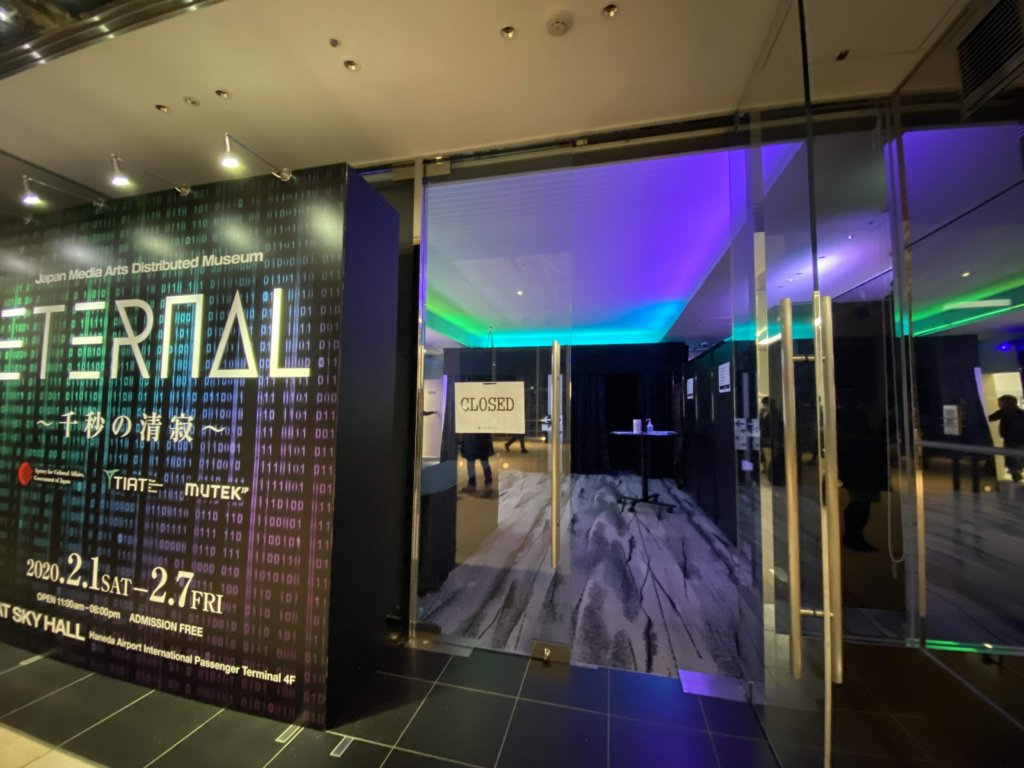 Here is the entrance. It looks like the Near-futuristic! 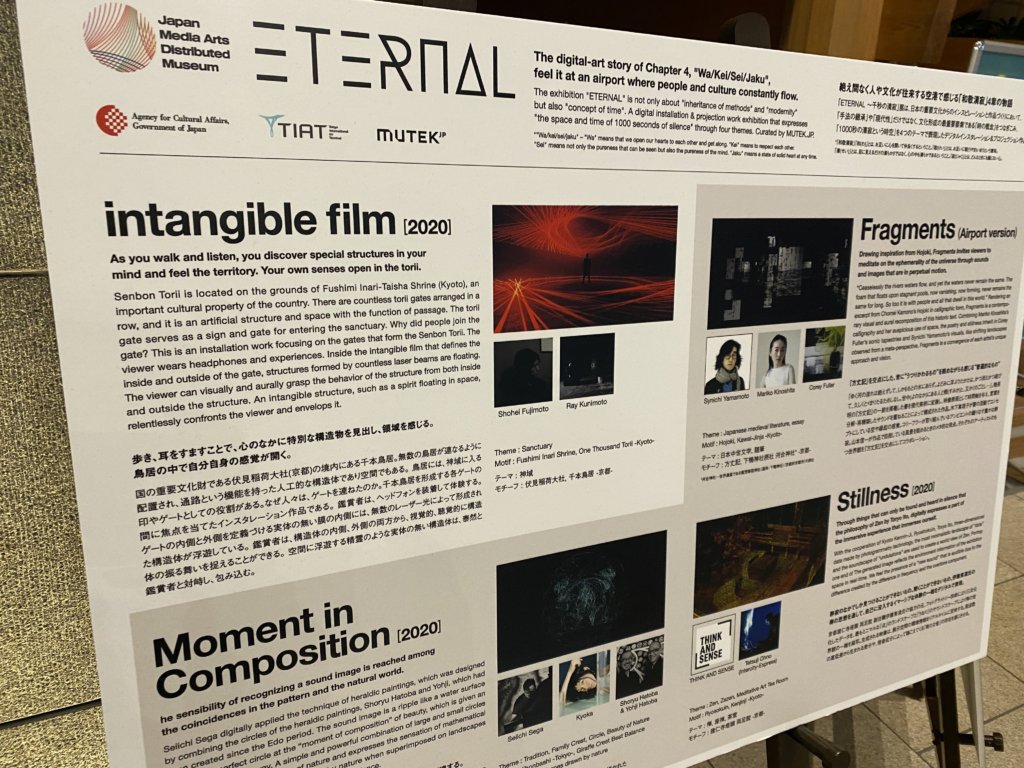 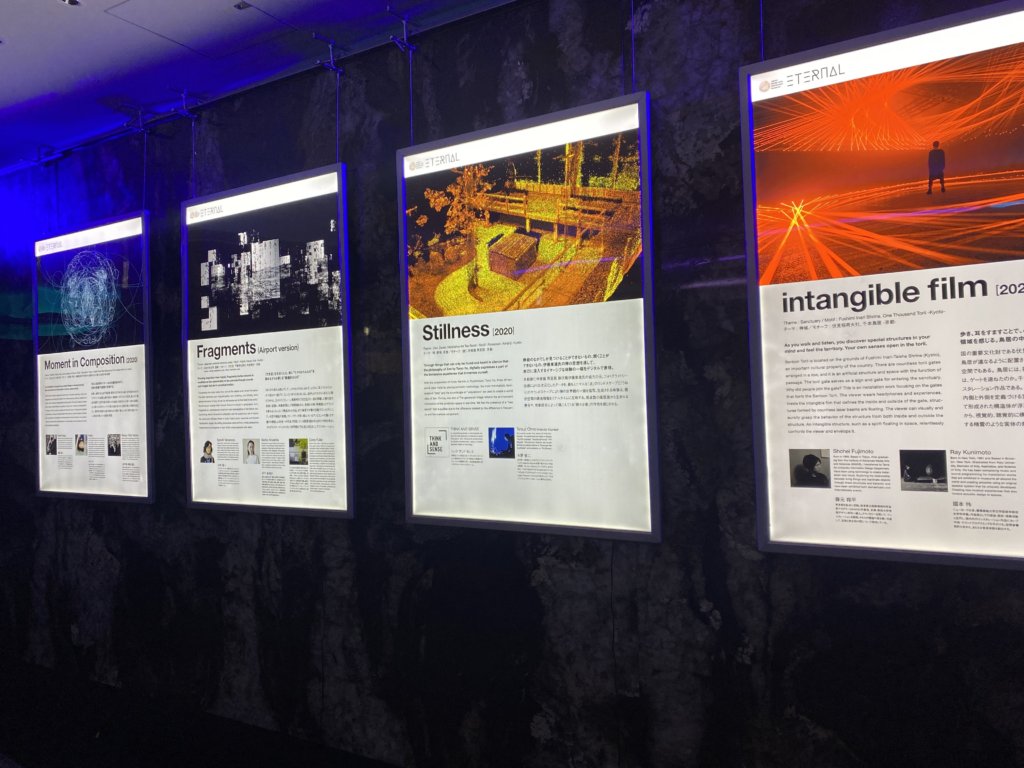 Since the venue is located on the 4th floor of the international terminal at Haneda Airport, the commentary panel is also written in English.
According to the commentary, this exhibition is a digital installation & projection work exhibition that expresses “the space and time of 1000 seconds of silence” with four themes. 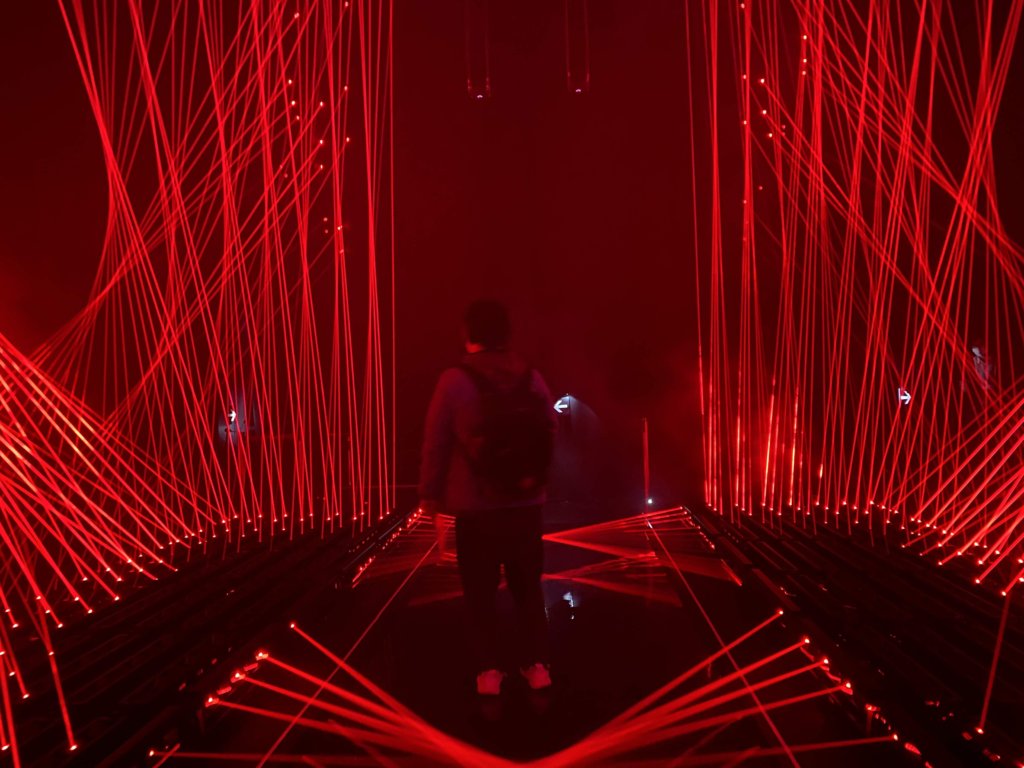 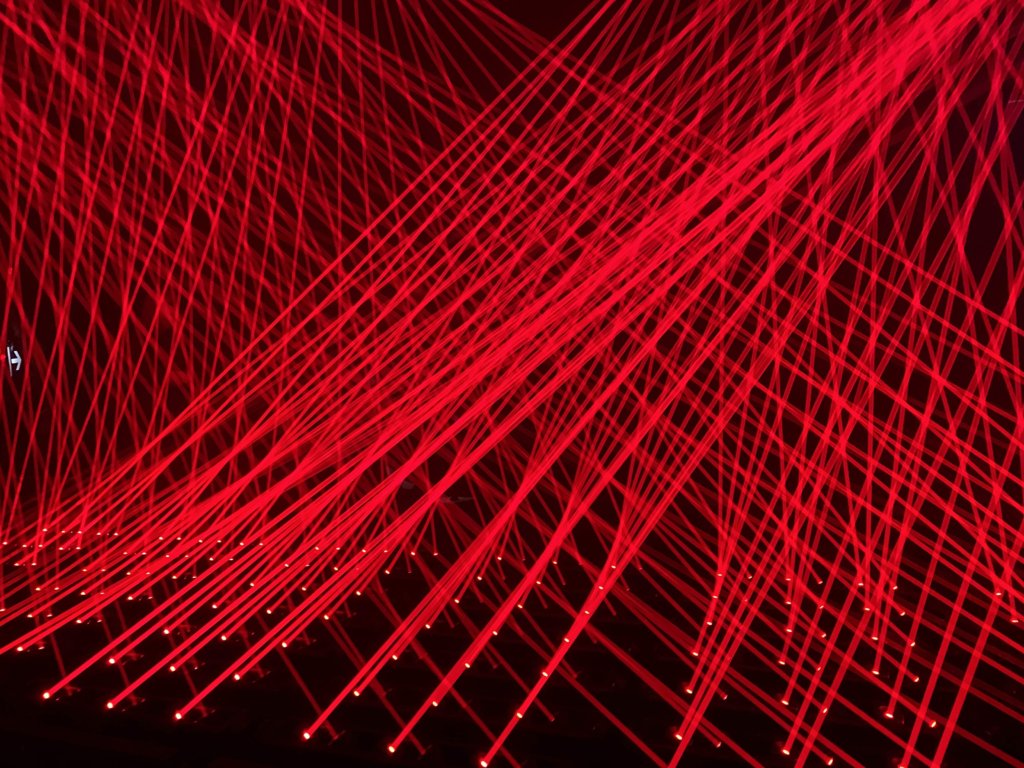 The title of the space where these red laser flies are “intangible film”.
It is said that the shrine is expressed with a laser using the motif of Fushimi Inari in Kyoto, famous for the Senbon Torii.

The next corner is “Moment in Composition–麒麟紋曼荼羅–”.
The technique of the Kirin crest circle is digitally incorporated, and the mandala is expressed by a combination of circles.
At first glance, it looks like it is drawn as a curve, but all are “circles”!

There is a strict atmosphere that is different from the red world.

Next is Fragments [Airport version]. 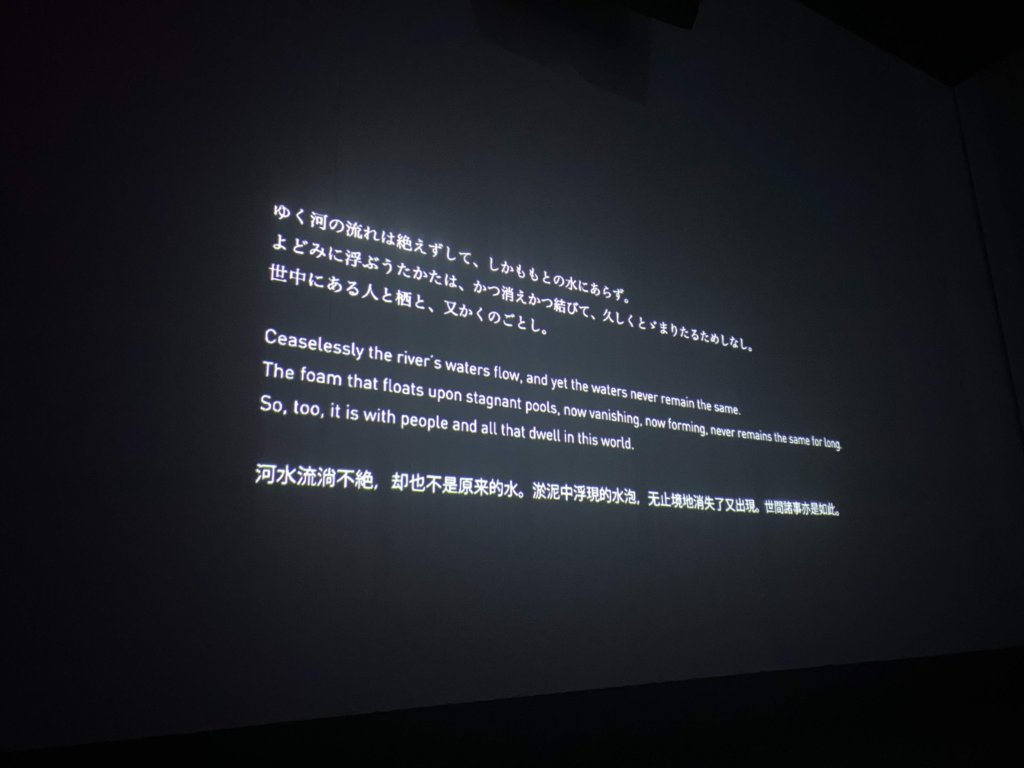 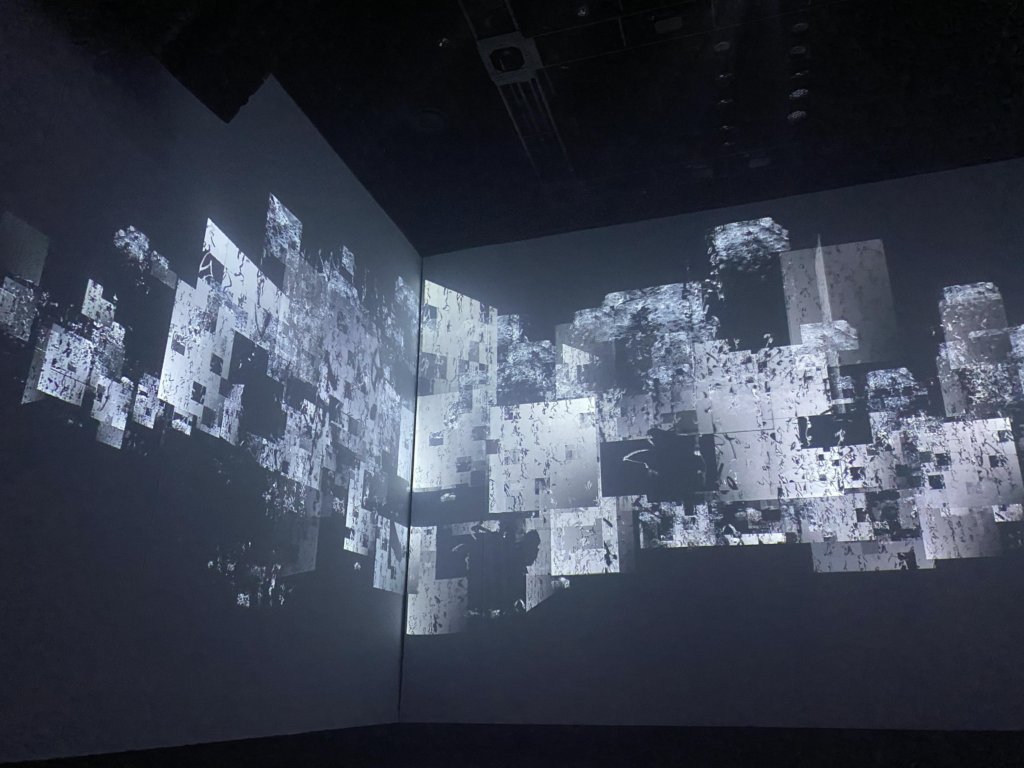 This is a visual representation of what was written from the verse of Kamo Nagaaki’s Hojoki, and a sound with words disassembled and reconstructed.

There are many formats that match BGM to video,
The point of “overlapping the sound of disassembled and reconstructed words” is exactly digital art.

It seems that the three-dimensional data obtained by converting the Kenninji Temple in Kyoto by photogrammetry technology into a set of “dots”, which is being converted into digital art whose appearance changes in real-time according to the environmental information of the exhibition space.
The scenery, which was the main point of the photograph, becomes a set of points and moves dynamically.

In addition, various digital arts were exhibited, such as images based on digital “0” and “1” motifs and images combining the sea and a perfect circle.

By the way, “MUTEK.jp”, which was introduced the other day, is greatly involved in this exhibition.

It was also a place to transmit the technology shown at MUTEK.JP to the world.

It has become a new world of visual expression that combines ancient Japanese culture with the latest digital technology.
It was an exhibition where you could fully enjoy a futuristic atmosphere different from VR and AR!