Is there a revolution in tea culture in the pop-up store?!

It has been warm recently!
Everyone, Hello, it is Yamagishi known as Maggie from GP!
We will talk about pop-up store this time.

Pop-up store that is highly event-like and can create new added value to products.
With the spread of SNS, each person has the ability to spread, and even with closed pop-ups, the advertising effect is enhanced and attracts attention again.
Pop-up that you can experience directly, Maggie that Yamagishi wished to its charm, I wish to investigate the tea brand Lipton of great response which has been opened a store for three times at Omotesando! 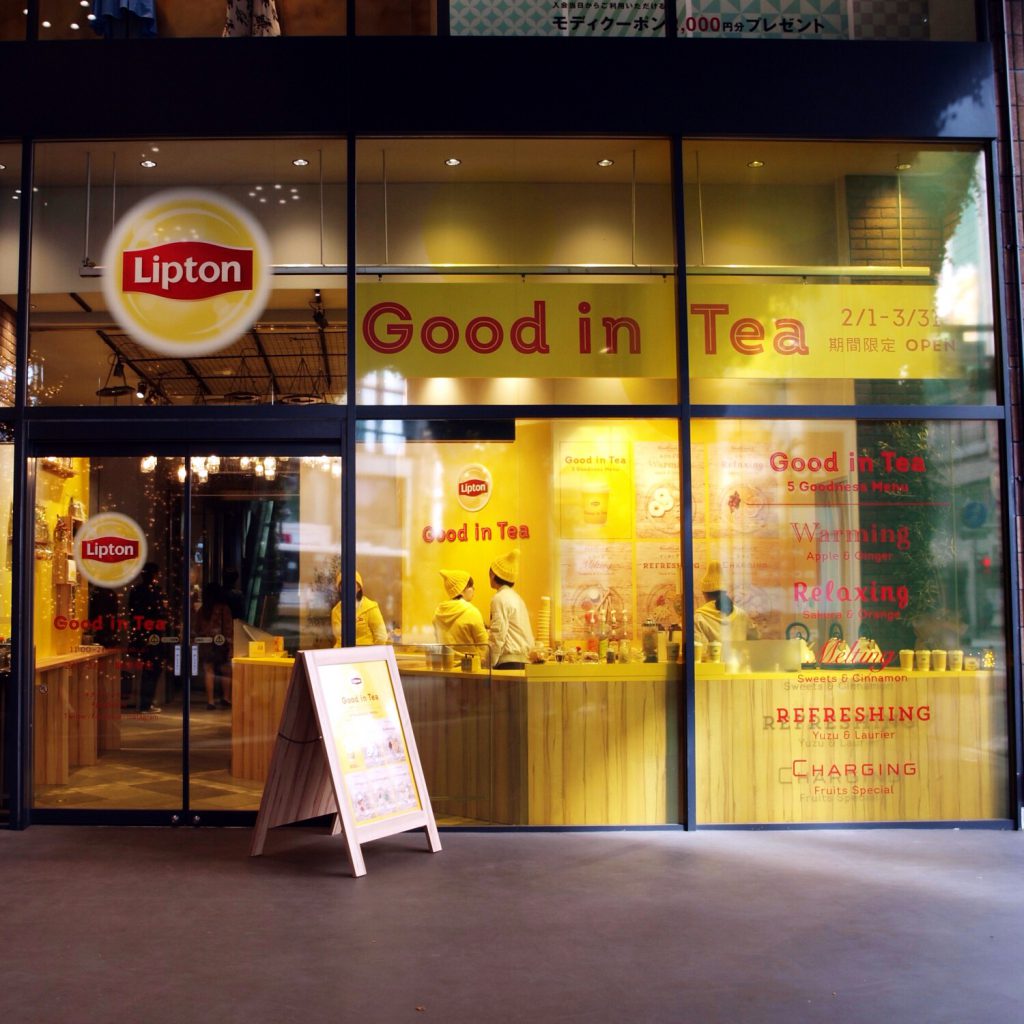 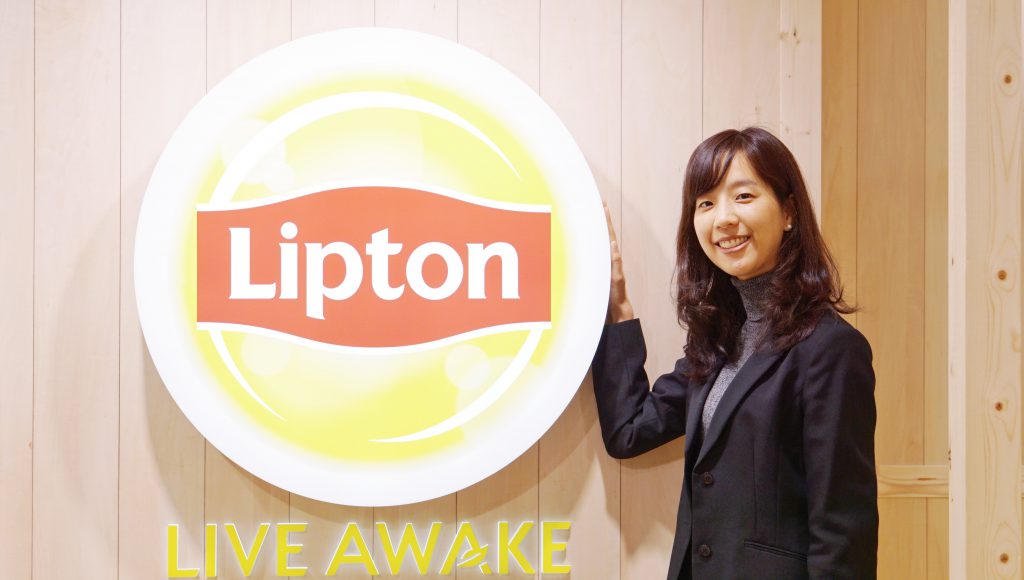 ■Omotesando is a battlefield with pop-ups
Around our office, a lot of pop-ups are opened every month, and the procession that suddenly appears informs you of its existence.
One of the standouts of such a procession was the pop-up of Lipton to be introduced this time.
“In Tea” style that appeals to the unique arrangement value of black tea that can not be used for Japanese tea and coffee.
In summer, bring colorful fruits, herbs, and super food into a dedicated tumbler and bring them to the city.
It is a new style of black tea that can be arranged according to the mood and condition of the day by putting dry fruits full of natural power into the black tea bathed in the sun’s blessing in winter time.
As symbolized by Insta, we firmly grasp the need to stick to the taste and the appearance, and the store opening in 2017 has become a boom with over 110,000 tumbler sales.

Compared to coffee, tea with less fun arrangement menus.
How did Lipton make an impact there?
This time, I spoke with Mr. Okamoto, who is responsible for the Lipton brand manager at Unilever. 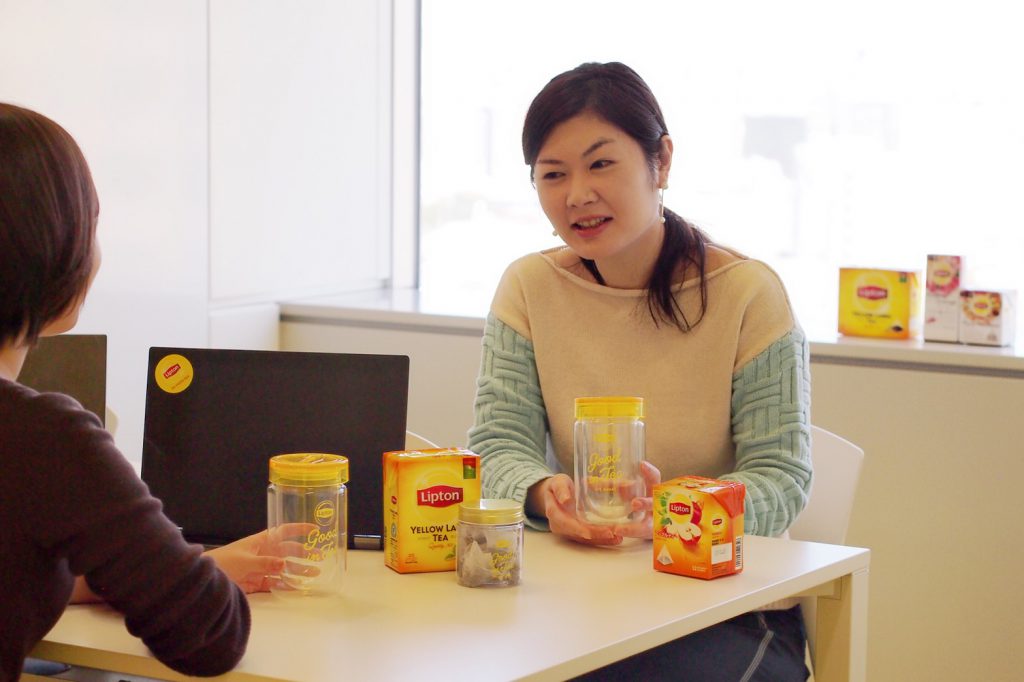 Yamagishi:
First of all, can you tell me why you chose the pop-up store method?
Okamoto:
The first reason is that I wanted you to experience the different arrangement of coffee and green tea directly at the event.
Tea adds fruit, and looks and taste works, but those who don’t usually drink tea often have a preconception of “tea.”
Pop-up stores have been launched to break down the somewhat classic and inconvenient image and to have young people get familiar with tea and drink tea. 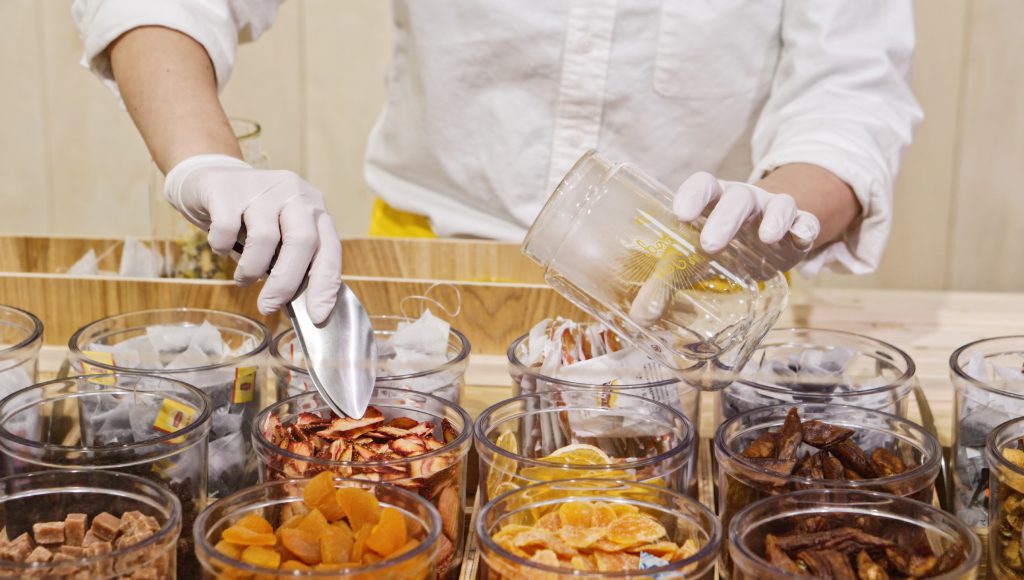 Yamagishi:
It was opened to target people who do not usually drink tea.
So why did you choose a place called Omotesando?
Okamoto:
The Omotesando area was perfect for creating a new image of “fashionable and delicious tea”.
It is also a source of fashion, so I chose to create a new boom from here.
Yamagishi:
A pop-up store was opened last summer with the concept of “Fruits in Tea,” but how was that response?
Okamoto:
Despite the hot summer, I received a big response that can be queued up to more than four hours.
In addition, the tumbler was in the hands of a total of 110,000 customers, and many of them enjoyed Fruits in Tea.
Yamagishi:
Where is the obligatory “Good in Tea” this time?
Okamoto:
Although the pop-up store in 2018 is an underground store, the image of the sun, which is also a Lipton brand logo, is created with an awareness of the bright store interior.
Since this is an event, we are working hard to make customers think that they have come.
This time, not only the design but also the special provision stand with lighting from the bottom of the glass, so that the black tea is extracted and the dried fruit in it looks beautiful and photogenic. 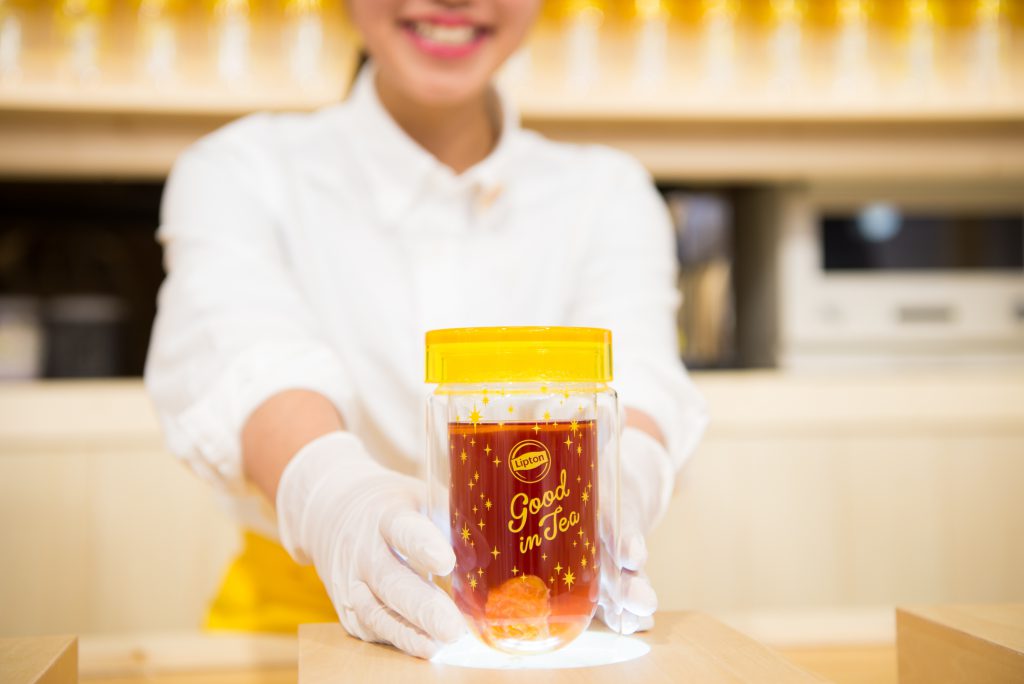 Of course, I also created goodies. “Double Wall Glass” has been well received, with double sales expected.
In addition, because we want you to try Lipton Good in Tea at home, we also offer “Lipton Good in Tea Mixed Dry Fruit”, which can be easily arranged tea by adding “Limited Design Tea Bottle”. 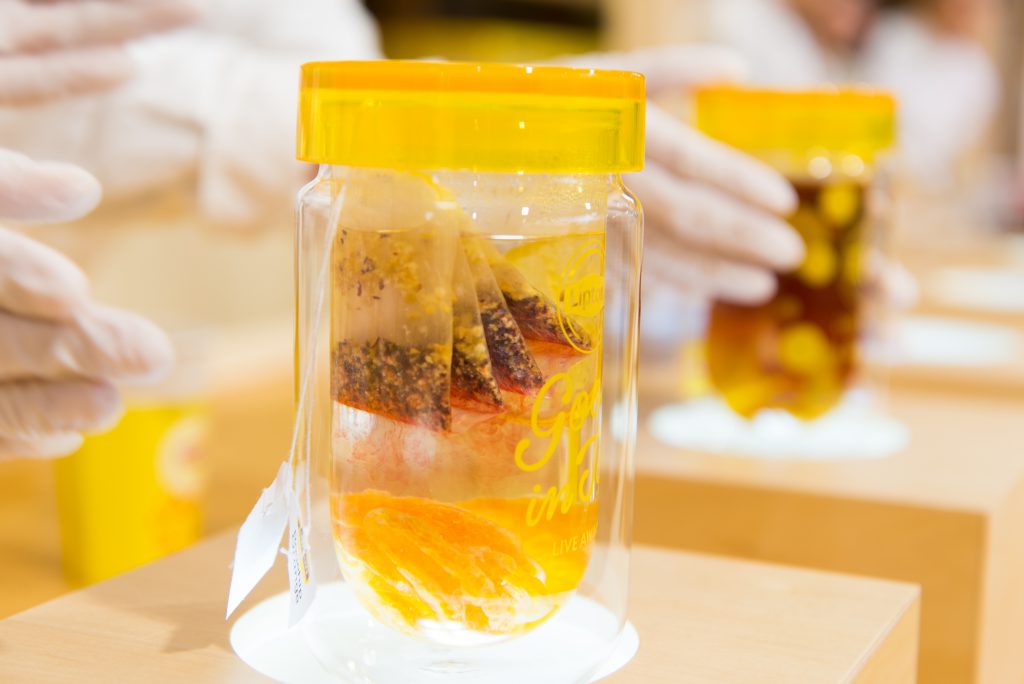 Yamagishi:
Could you tell us about the prospects and future prospects of the pop-up store advertising method?
Okamoto:
The best way to break the image is to experience it.
In order to break the image of “high image of tea” possessed by those who don’t drink tea, I think it is very effective to show them how to actually drink it and try it.
The pop-up event also raises the level of attention, and it is easy to become a topic even in social networks from a limited sense.
You have to visit the store, have a cup of tea, and spread the state and feeling you enjoy to SNS ……
I would like to continue using pop-ups as an advertising method to enjoy with customers. 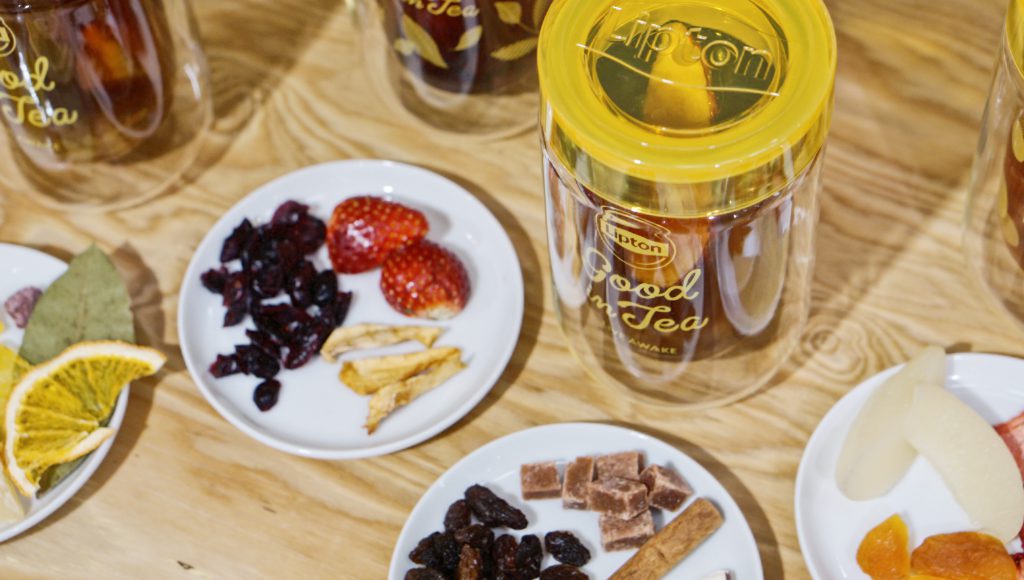 Pop-up store is for a limited time, limited in place and I think it is very close to the event.
The ability to process in an era where you can buy anything online is evidence that it is so attractive.
After all, the impression that comes from the experience of life moves people’s hearts!

And it is a big problem that the event and the pop-up do not end with a transient.
Through the pop-up, Lipton removes the high image of tea and tries to create a culture of enjoying tea more closely.
Participation in the event triggers a change in the mind of the participant, leading to a motivation for tomorrow, which in turn leads to a company’s performance. Both pop-ups and events have something in common!

But what does a kick off event do for you?